Get fresh music recommendations delivered to your inbox every Friday.
We've updated our Terms of Use. You can review the changes here.

by The Bitter Poet 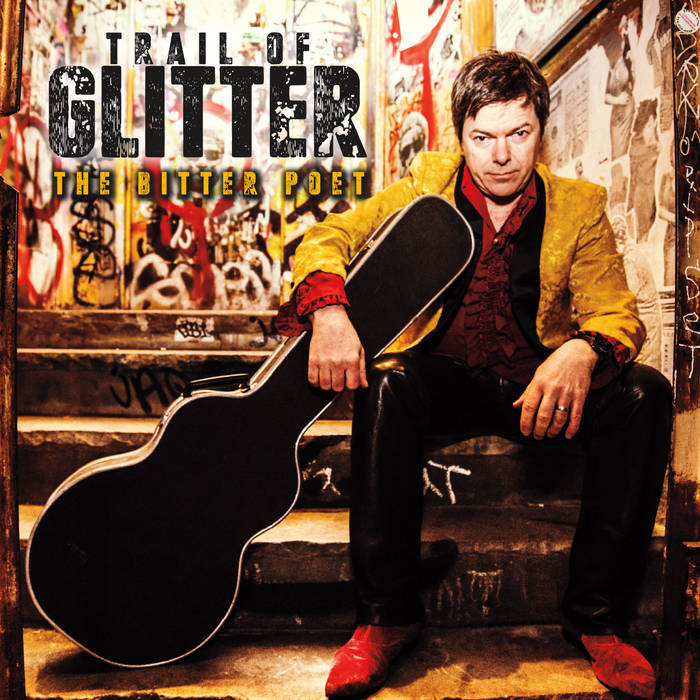 Trail of Glitter is The Bitter Poet's first full-length solo album. The album’s 11 tracks capture the highlights and low-lights of The Bitter Poet’s past decade. From being single to finding love and marriage, Trail of Glitter follows his personal misfortunes and petty triumphs, as he grapples with his own failings in the pursuit of love, lust and fame in New York City’s downtown music and performance art demimonde.

“The Bitter Poet’s “Guy’s Gotta Breathe” is a manic, almost unhinged anti-folk stream of consciousness anchored by literate, specific lyrics and an engaging vocal performance. It is a whirlwind 2:46. His voice moves from a grumble to a howl throughout the song, keeping the listener close with his tenor’s ratcheting tension. The tension finally explodes at the end of the tune, providing a fitting end to the wild ride. If you’re into The Mountain Goats’ lyrics, you may find The Bitter Poet to be incredibly appealing. In the way of all unique things, the song does takes a moment to adjust to. After you settle in, it’s really impressive and calls for multiple listens.” –Independent Clauses

The Bitter Poet's anti-folk, indie-rock, musical storytelling is darkly humorous, intense, gritty. His songs are honest to a fault, yet over-the-top and grandiose in the style of Tom Waits or Nick Cave.
Musically, his straight-ahead rock chords and carnival-like lyrics blend humor, pathos and outrage. He has been described as “Lou Reed meets William Shatner” and “The Doors meet Jack Nicholson.” ... more

Bandcamp Daily  your guide to the world of Bandcamp

sndtrak stops by with an Album of the Day Feature of his most recent release, FLIPS V1: Triple Lindy